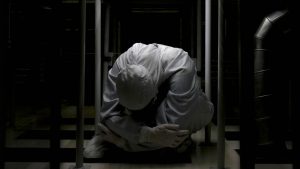 Zero Point Energy is set inside a cleanroom – a laboratory for research at the atomic level. The materials that are studied and created within nanoscience exist in a world beyond our perception, one that we can neither see nor feel. A recurring theme in nanoscience is the notion of breaking new ground; of embarking on a journey into the unknown. In many ways it is a reflection of space exploration; a miniature space full of undiscovered worlds.

In the film we encounter humans and machines, two essential actors in the nano research. The scientists are covered in garments that separate them from the nanometre-sized protagonists, their full-body coveralls and the white and yellow lighting give the room a distinctive quality. Inside this room a new humanity is taking form and established boundaries are dissolved. Nanotechnology presents the prospect of a human existence – promising yet perilous – permeated by technological constructions. It is a vision of man both as creator of technology and created by technology.

The title, Zero Point Energy, refers to the energy of the ground state of any quantum mechanical system. In the film this term is used speculatively, suggesting an imagined ground state of the cleanroom. Inside the clean- room, movements and behaviours are strictly regulated to prevent humans from influencing the sensitive processes in undesirable ways. In a choreog- raphy where researchers become dancers, this control over the individual in the service of science is both accentuated and challenged. The systematic structure of the ballet emphasises controlled patterns of movement but also introduces disruptions and energy that moves the cleanroom from its ground state and challenges it’s inherent choreography.

Zero Point Energy is part of the project Nanosocieties, a collaboration between artist Kerstin Hamilton and the nanoscience researcher Jonas Hannestad. The choreography is developed by Anna Asplind and the sound composed by Lena Nyberg and Emma Ringqvist.